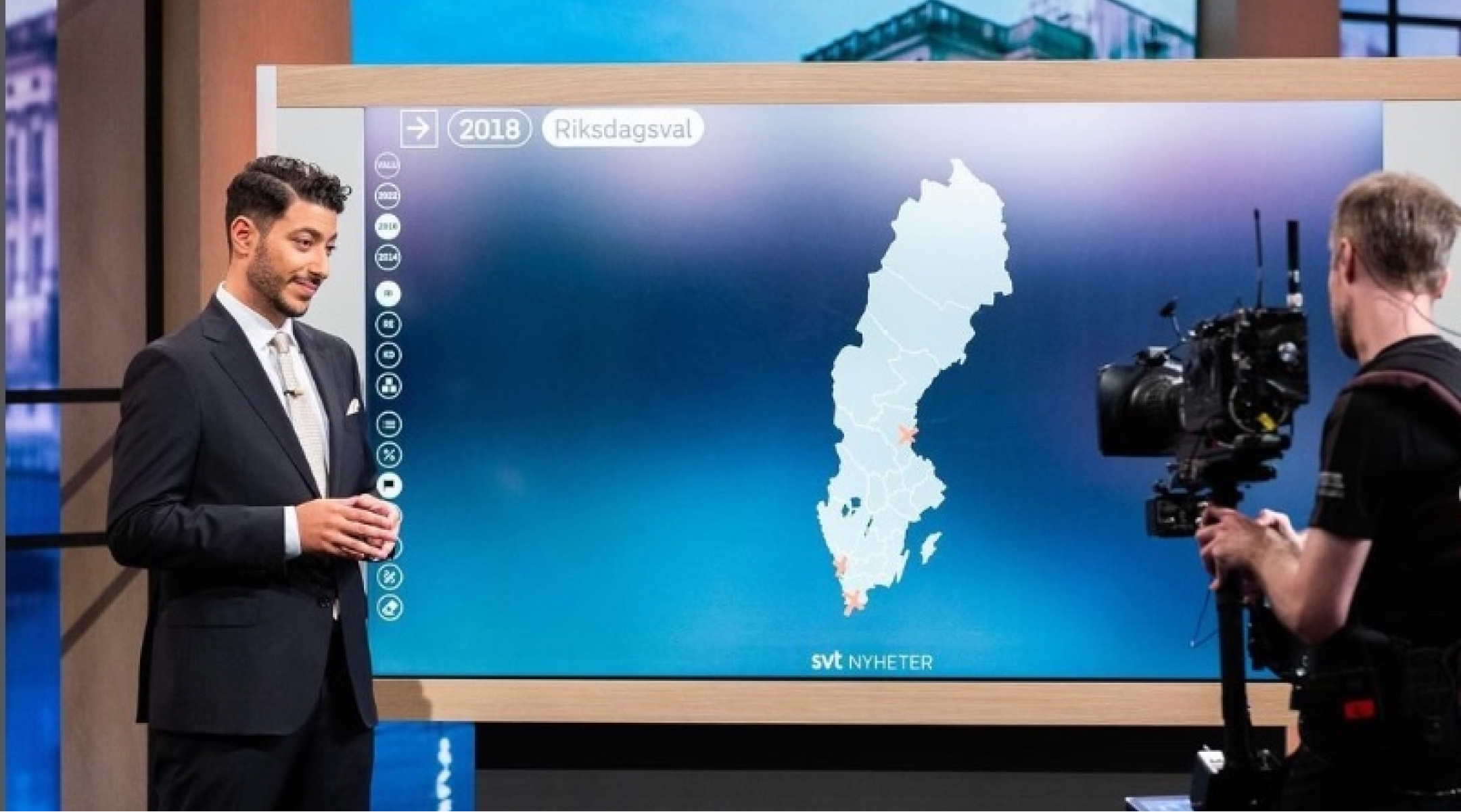 This year, September 11 was Election Day in Sweden. Election coverage from the country’s public service media, Sveriges Radio (SR) and Sveriges Television (SVT) is normally extensive, with journalists working day and night across all platforms.

Most elections are billed as high stakes. In 2022, this may be even truer: The new Government will be responsible for Sweden’s first steps into NATO.

Swedish Citizens vote for the Riksdag (Parliament), Regional and Municipal representation the same day and, for these elections, SVT used IK Election Insights Application to support and enhance the coverage of their election results.

SVT’s political commentator Fouad Youcefi and his expert panel took viewers through all the results as they flowed in live from thousands of polling booths in districts across the country.

The IK Election Insights allowed Fouad to focus on communicating the story, as it unfolded in a visually appealing way and in an easily digestible manner, for the Swedish electorate.

Like with most countries around the world, Sweden is facing an onslaught of fake news. Sweden recently (in 2022) had to create a new agency (Swedish Psychological Defense Agency) to combat disinformation ahead of the parliamentary elections.

Along with support from Government institutions, it is increasingly falling on objective public news organizations like SVT to lead the way in offering unbiased data and news to the Swedish citizens

Normally, Swedish Elections have a high voter turnout of over 85%. Swedish citizens are highly interested and involved in the electoral process. SVT needed a data visualization solution to handle the electorate’s thirst for easy-to-understand information that could:

SVT collaborated with InterKnowlogy (IK) to design and develop an immersive and intuitive data visualization experience using the IK Election Insights product that integrates with live data feeds consisting of thousands of datapoints from different Government sources, aggregates the information, and enables the host to focus on story telling through real time data visualization in a simple and consumable way for hundreds of thousands of primetime viewers on live television.

IK collaborated with various stakeholders at SVT to understand the challenges posed by the existing election coverage process. Fouad was actively involved in decision making right from Day One which was wonderful as he was going to be the main user of the IK Election Insights App.

After quick consensus on standard customizations such as colour schemes, fonts, and branding most of the design time was spent between the IK and SVT teams to design the brand-new Build a Government tool.

The Build a Government tool (which was fondly nick-named as BaG) was designed as a smart scenario building tool that IK developed specifically for SVT. This feature was very important for SVT and is particularly useful in the Swedish context where multi-party coalition Governments are the norm, in which no one party has a chance of gaining power alone, and the balance of power rests across party lines.

BaG provided a very intuitive way for Fouad to quickly build “what-if” scenarios by dragging and dropping different parties between Government and Opposition sections on the screen to discuss which potential party combinations can form the Government coalition.

In Swedish electoral system, each Party needs their vote count to be over a certain threshold to be awarded Seats in the Parliament. The BaG tool also provided an easy way to simulate potential re-distribution of Seats by creating scenarios where certain Parties who are meeting the threshold could be marked as not meeting the required threshold and vice versa. The Seat redistribution was done by using special algorithms specifically designed for the Swedish electoral system.

Another customization on this project was around the concept of VALU - an abbreviation for vallokalundersökning, Swedish for exit poll survey. Voters leaving polling stations are asked by SVT, to fill in a questionnaire that is then anonymously collected. After processing the responses, SVT can present an election forecast and an analysis of the reasons underlying the outcome of the election in its primetime Election Night broadcast.

The IK Election Insights Application had to be designed to be able to display VALU results and allow BaG scenarios using VALU results.

IK leveraged its deep expertise across both its backend and frontend engineering capabilities in delivering complex and immersive data visualization by creating the SVT customized version of the IK Election Insights Product.

Some of the customizations that IK had to do on this project was on the deployment front. Normally the IK Election Insights product is deployed on a Cloud and IK integrates directly with the Government Agency that provides election data for past and current elections. For this project, SVT was quite concerned about bad actors and cyber security and wanted to ensure that the IK Election Insights ran in a sandbox with no connection to the public internet. Instead of integrating with a Government Data source, IK integrated with the SVT middleware which provided all the Election data that IK required. In this model, IK software only communicated with the SVT middleware and had no need to connect to the public internet. IK made it very easy for SVT to deploy software by providing Docker Images that could be very quickly setup and run on-premises. In case of last-minute bug fixes, new emergency drops could be installed and run in a matter of seconds. This secure deployment model ensured that IK software could not be hacked in any way and provided maximum level of security.

One of the challenges that IK faced was around performance. Sweden has over 6,000 districts that report election data. The updates happen every few seconds. In the early days of the implementation, the endpoint was defined in such a manner that IK software had to make over 6,000 individual requests to get the election data to display. This was obviously not very efficient for software that would be used on Live television. IK and SVT then collaborated to define an updated endpoint that provided data for all the districts in a much more efficient manner. This sped up the Extraction-Transformation-Loading (ETL) process immensely.

Also, in previous projects, IK Election Insights supported 3 levels on the map, and this was sufficient for election coverage in the countries where the product had been previously deployed. But for Sweden, the architecture had to be modified to support 4 levels on the map (National -> Region -> Municipality-> District). This introduced some challenges that IK was quickly able to resolve to SVT’s satisfaction.

The entire solution was developed in an Agile manner which meant that SVT did not have to wait for months before they saw what the experience looked like. SVT stakeholders were given demos of the User Experience evolution every week and they also had access to the latest features as they became available so that they could engage with it and give IK quick feedback if any changes were required.

Election night was a big success for SVT and the live election broadcast that was almost six hours in duration went without hiccups.

Thomas Mattsson, a Swedish journalist, editor-in-chief and former publisher for the evening newspaper, Expressen, tweeted during the SVT election coverage that roughly translates to "The results from the election authorities are not in yet, but I am already appointing @fouadyoucefi as the winner of the election. Like a John King on CNN".

Being a public broadcaster, the objective for SVT is to offer a fair and balanced coverage of the elections based on data and IK Election Insights assisted them in meeting that objective.

SVT successfully delivered one of Sweden’s most in-depth and advanced coverage of their elections throughout the evening of Sunday, 11th September 2022 and into the early morning the next day. The IK Election Insights continued to be used for analysis for the next few days as additional voting results (especially from mail-in ballots) trickled in. The results were certified on the Wednesday following election day.

All stakeholders at SVT were extremely pleased with the collaboration and outcome of this engagement between SVT and IK.

SVT and IK are actively engaged in conversations regarding future collaborations to enhance the capabilities of the IK Election Insights and see how cutting edge technologies can play a role in making their coverage even more visual and engaging. 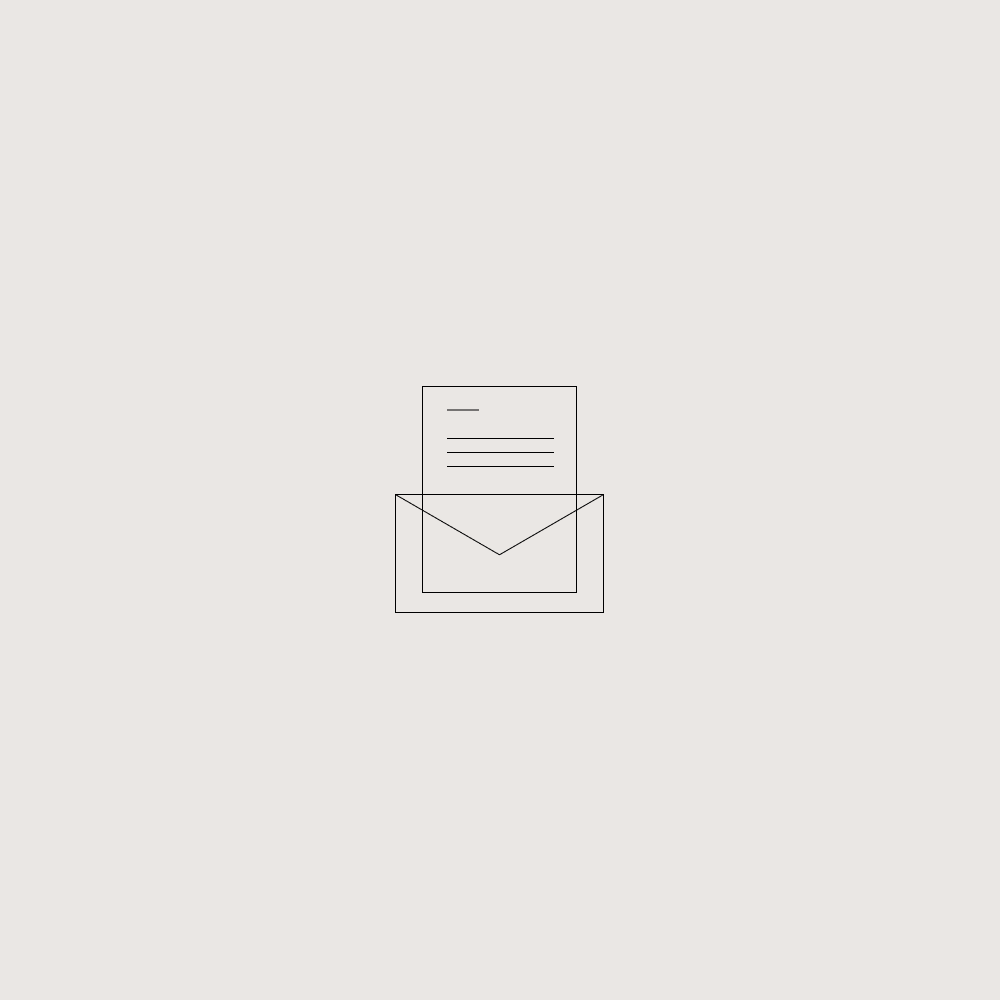